Prop 47: What It Means, How It Passed

This week California made history by passing Proposition 47: The Safe Neighborhood and Schools Act. We are the first state to downgrade certain cases from felonies to misdemeanors.  Liberty Hill Foundation can say with certainty that this proposition would not have passed had it not been for the concerted effort of grassroots organizations, including several of our grantees such as the Californians for Justice Education Fund, Khmer Girls in Action, LA Voice PICO (whose members are shown in this post's three photos), Los Angeles Community Action Network, SCOPE, Youth Justice Coalition, Innercity Struggle . These and many more groups throughout the state put in countless hours of volunteering, phone banking and canvassing to get the job done. 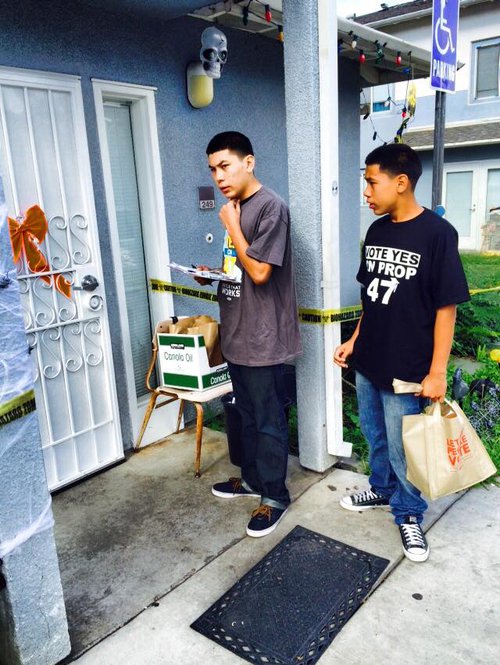 So what does passing Prop. 47 mean to Californians? As pointed out by the L.A. Times , penalties for common drug and theft crimes in California will be reduced from potential felonies to misdemeanors, shortening  sentences. As a result, reductions in state prison spending will now fund crime victims, the state jails commission and the California Department of Education, thus investing in schools, not prisons. As stated in our earlier blog post, Prop 47 is an important step toward preventing our students and young people from getting dragged into our juvenile and criminal justice system.

The passing of Prop. 47 not only is a key step in breaking the school-to-prison pipeline, it may also have some ripple effects. The reform has struck a chord with the rest of the nation. A New America Media post points out that California has been a leader in criminal justice legislation, specifically with the “three strikes” law. With the historical ramifications of Prop. 47, the rest of the nation may be inclined to institute similar legislation.

According to The New York Times, “It is very rare for lawmakers anywhere to approve legislation to shorten sentences for people already in prison; it is virtually unheard-of to do it by ballot measure. California’s continuing experiment on sentencing can be a valuable lesson to states around the country looking for smart and safe ways to unravel America’s four-decade incarceration binge.”

Passing Prop. 47 was a statewide effort with many organizations and communities joining together in one collective voice. Liberty Hill Foundation is a co-sponsor of the Alliance for Justice’s Post Election Debrief where a celebration and discussion will take place on how non-profits helped shape the election. For more information on this November 20 event, or to attend go here.

Why Justice Begins at Home