Laurie was a trailblazing leader who transformed the field of equity and leadership development across the state. She created the Board and Commissions Leadership Institute at Urban Habitat in Oakland—a model for leadership training that has now spread across the state and country. She was a dedicated partner on the creation of our Commissions Training program a decade ago and remained a trusted and valued partner, colleague, co-conspirator and friend to Liberty Hill, working closely with our Commissions program and the Wally Marks Leadership Institute up until her sudden passing.

Laurie had a magical ability to build trust wherever she went, with grassroots leaders and community groups, as well as commissioners and elected officials. She could always be counted on for stunning insights and dark jokes you never saw coming.

She was a true believer in people and loved working with them. She believed in transforming harmful systems that are threatening and destroying lives, but she knew it would take deeply interconnected, loving communities and networks of people to make that type of systemic change possible. In addition to her consulting practice with Cities and People Advisors she served on the San Francisco Sunshine Ordinance Task Force, and in all parts of her life remained a steadfast advocate for social equity, and in particular for disability rights and adoptee rights fueled by her own experiences.

Originally from Texas, Laurie had been a longtime resident of San Francisco, but was a lover of Los Angeles and Liberty Hill. She truly made a difference in so many lives— in a myriad of ways—and will be deeply missed and fondly remembered for her wisdom, kindness and social justice advocacy. She is survived by her devoted husband, Gordon, her siblings, her children, and her grandson.

The Liberty Hill Community honors her legacy and will cherish her memory. Scroll down to read some fond remembrances of Laurie from her friends at Liberty Hill and the broader social justice community.

Laurie was one of a kind. Her warmth, kindness, and passion came across in every interaction you had with her and in all of her work. She was inspiring to be around, the kind of person who believed so deeply in creating a better more just world and lived her values every day. She was dedicated to movement building, she demonstrated it in how she partnered with folks and in the projects she championed. She was a dedicated partner of Liberty Hill and an architect of the Commissions Training Program. Her absence leaves such a big hole but her impact will live on.

Authentic: You knew her spirit and her opinion from the moment you met her. No masks, all Laurie.
Courageous: You were never alone in the hard, stuck places. Laure was there with you, holding the belief that you both would make it through without losing your humanity.
Loving: You knew her heart because Laurie spoke and acted from it. She took the time to really see you and let you know you belonged.

From Eugene, Oregon down to the San Francisco Bay, and SoCal - everyone knows Laurie was a REAL ONE One of those precious people who just through being herself, gave others permission (or she organized them =) to do the same. Her wicked sense of humor, her brilliant mind, and the way she held space with her presence will be deeply missed. Forever changed, I know her spirit will shine on and continue through us. Deep bows.

I first met Laurie in 2013 as we launched Long Beach’s first training for people not typically represented on boards and commissions to serve in those roles. Countless Long Beach commissioners and community members (and many others in many places) have been impacted by her work and deep belief in democracy and mutual accountability whether they knew her or not. But Laurie is much more than the empowering work she’s created and supported. She was a loving friend, wife, mom, and granny. She was thoughtful, creative, and joyful even when acknowledging the weight of the world. I feel so grateful that she became a colleague-turned-friend. I felt so seen by her and I feel the loss of her deeply. Laurie continues to inspire me and I strive to carry her legacy and love forward.

It's hard to put into words the magnitude of this loss. I've been speechless the last week, angry at the fact that she is suddenly taken from us, immensely grateful for having known and worked with her, super jealous of those who got to spend all this time learning from her, and mourning the loss of a great friend, mentor, and force for good in this world. There was a moment when I felt so hopeless about the world because Laurie was gone. Who was going to scheme with me to fix the government?? Whose was going to remind me that there is still a path ahead? She believed in me even before I believed in myself. This loss feels personal but it also feels much bigger than that. Her work, heart, and love have far-reaching tentacles and that will never go away, but the void is hella big. Rest in power Laurie.

Laurie always used to say to me, I'm a teacher, in everything I do I'm a teacher. Sometimes she was a gentle teacher, offering light and diplomatic feedback, and sometimes she was a director, telling you exactly what to do. One time we showed up to run a day-long conference, and I was supposed to be in a support role because I was still new on the job. That morning, she showed up and said "I've been thinking about it, and you're going to facilitate everything today. I think it will be good for you." I was terrified and uncertain, but she was right--I could do it, and didn't realize how for months she had been teaching me and preparing me. And Laurie was also a teacher as a friend, the way that she helped me see myself, how we built trust and learned about each other, how she shared her view of the world and the experiences that shaped her. She loved schnauzers, baseball (Giants, not Dodgers), beadwork, dark humor, researching her family trees, fighting for disability rights and adoptee rights, baking cakes, her friends, her kids, her grandson, and her devoted husband Gordon. I've wondered a lot this past week if she had such an appetite for teaching because somewhere in her mind and heart, she was trying to prepare us for a day when she wouldn't be here to teach us anymore, and wanted to be sure she had given us all her wisdom about democratizing political power, how to make a terrarium, and which Tina Turner album is best. Thank you for letting me be your colleague, friend, and student, Laurie. I am forever grateful.

Laurie was a mentor to me and believed in me when I felt lost and didn’t quite believe in myself. I will miss her and mourn her loss deeply. I can’t help but think of all the great things she was yet to do in this world.

It’s been two weeks since I heard the news, and I’m still at a loss for words. I still can’t believe our Laurie is gone.

Laurie Jones Neighbors is so many things to so many people. But to me, she is our fairy godmother of Boards & Commissions Leadership Institute (BCLI). Not only was she the brainchild of the program, but she also mentored folks like myself who launched boards and commissions programs throughout the country. We’ve always said that boards and commissions work is not just a program… it is a movement. We believe that BIPOC folks, low-income folks, and folks with lived experiences should be at the table to make these decisions that directly impact us and our communities(and change what that table looks like and who has access to it).

Laurie along with Urban Habitat and the BCLI network supported Ana Laura and me when we launched and ran BCLI in San Diego for four years (2016-2019). She even flew down when we couldn’t afford to give her a stipend but could pay for her flight and lodging. She engaged our fellows on topics like networked leadership and inside-outside strategy. I miss her sense of humor, her laugh, and her Game of Thrones references. She believed in us and the importance of our work when sometimes our own organizations and funders didn’t.

I, along with so many others, am so incredibly sad that Laurie is no longer with us. Even though I am no longer doing boards and commissions work, I had always hoped that someday our work and life paths would cross again. Unfortunately, I am deeply saddened to know that it won’t be in this lifetime.

I miss you so much, Laurie. You left us too soon. May your wisdom, your hope and drive for a better world, and your love for our people continue to live on through us. I hope that we can make you proud. Sending so much love to Laurie’s partner, family, and loved ones.

Laurie was an amazing leader, mentor, phenomenal woman, and champion for justice. I am honored and grateful to have been touched by her and know that her impact will continue to be felt for generations. I learned so much from Laurie and will miss her deeply.

Laurie was such a sweet, warm, and encouraging soul. As a young person trying to find my voice in the movement, her pep talks and incredibly positive and fierce energy made a meaningful and lasting impact on me and my work. She will truly be missed <3 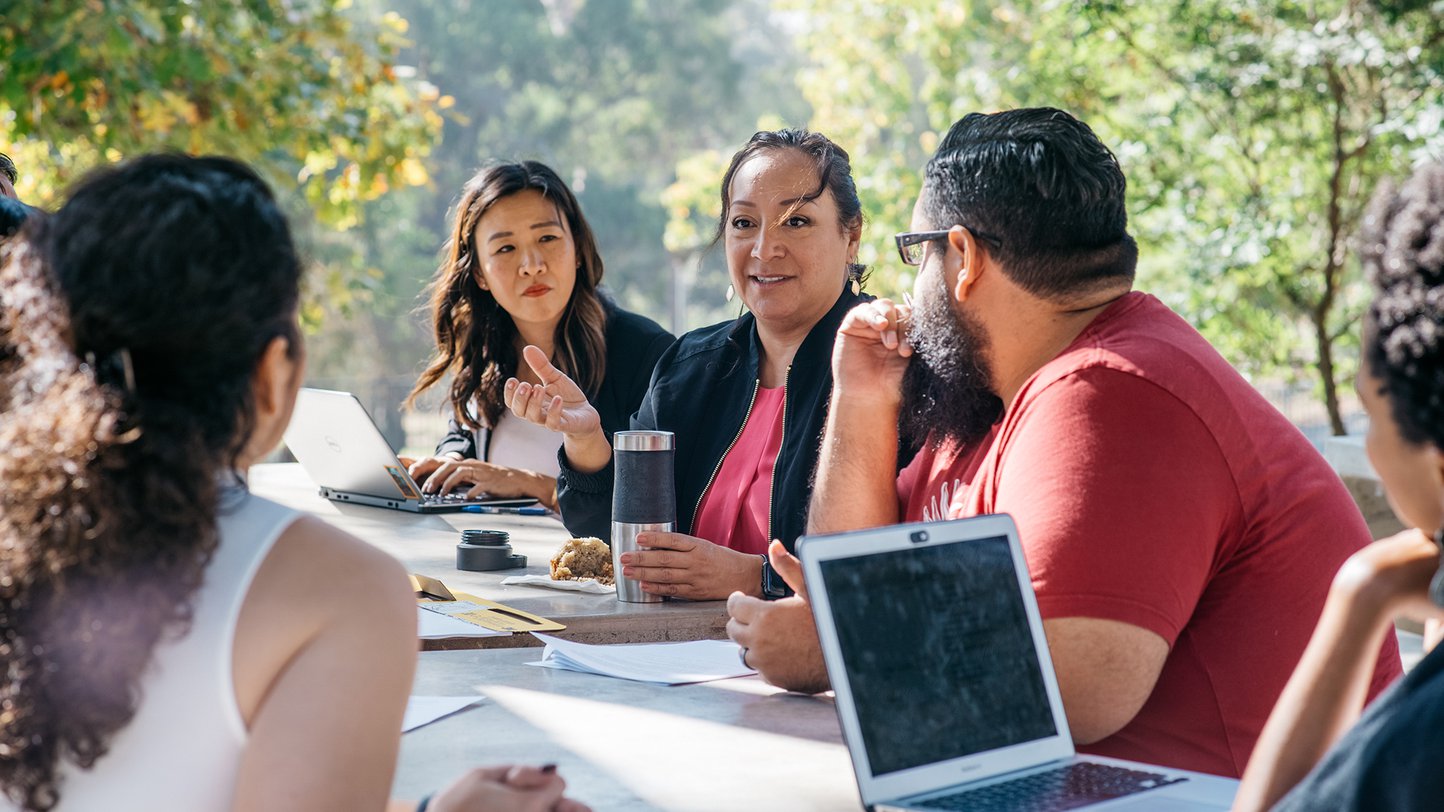